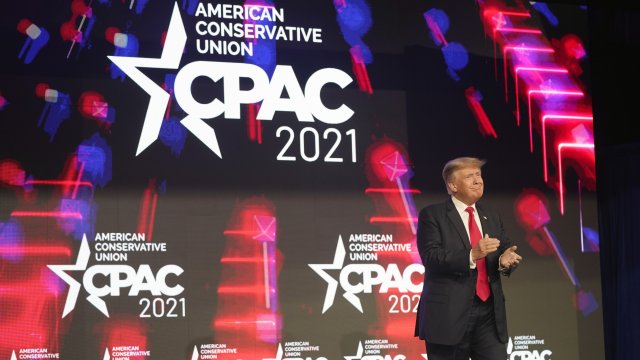 "I'm thrilled to be back in the heart of Texas with the proud conservative patriots," said former President Donald Trump.

Former president Donald Trump showcased his strong support among Republicans on Sunday in a speech at the Conservative Political Action Conference in Dallas.

"We must pour every ounce of our energy into winning a historic victory in the midterm," Trump said.

Trump's remarks come as the Republican party is focusing on flipping the House and Senate in the 2022 midterms. And his endorsement is heavily sought by Republican candidates across the country.

In a CPAC straw poll, Trump easily won a majority support with Florida Governor, Ron DeSantis coming in second. And attendees here made clear they would back the former president if he runs for office again.

"The first time I ever voted for a president was voting for President Trump," said Terri Addison.

"I think if President Trump wants to run for President he's going to be the nominee," said Missouri attorney general Eric Schmitt. "There's a lot of different voices for the party but clearly President Trump is the leader of the party."

CPAC conferences have traditionally been used by future White House candidates to introduce themselves to the influential group of activists. But the former President's hold over the GOP doesn't leave much room for a new leader...a concern for at least some in attendance who worry Trump could jeopardize the party's chances of retaking the White House.

"I would prefer he put his support behind Ron DeSantis, Kristi Noem or any other polished conservative out there," said William Marcus Chinn.

"Never forget that the radical left is not the majority in this country, we are the majority and it's not even close," Trump said.

Trump used the speech to rally the crowd around conservative issues but he also took time to blast his political enemies and repeat false claims about the outcome of the 2020 election.

"They want to stay away from talking about the election results," Trump said.

Trump's latest appearance is part of what some see as a come back tour to rally his political base.