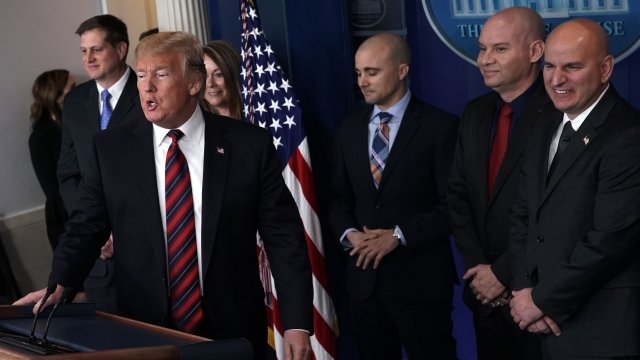 President Donald Trump made a surprise first appearance in the White House briefing room Thursday, but it wasn't a typical briefing.

Instead of taking questions from the press, Trump talked about his push for a southern border wall.

The wall is, of course, the main sticking point in the current partial government shutdown. Trump wants $5 billion to build the wall, but Democrats don't want to spend money on a physical barrier.

Trump also shared the podium with officials from the National Border Patrol Council who echoed his calls to build a wall.

"I can personally tell you from the work that I have done on the southwest border that physical barriers, that walls actually work," Brandon Judd said.

"We are all affected by this shutdown. We have skin in the game. However, it comes down to border security, and we are extremely grateful to President Trump and we fully support what he is doing," Art Del Cueto said.

The entire event lasted less than 10 minutes and focused almost completely on the border.