Trump Doubles Down On Anti-Immigration Rhetoric As Reelection Strategy 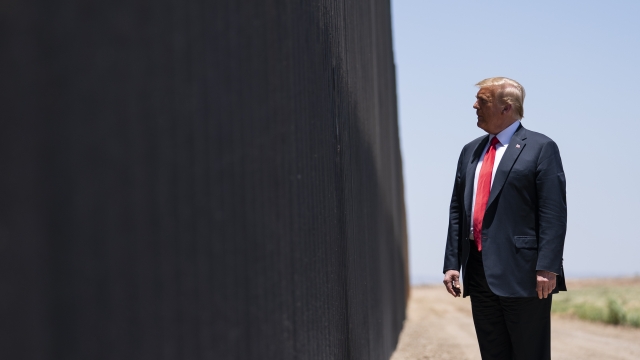 SMS
Trump Doubles Down On Anti-Immigration Rhetoric As Reelection Strategy
By Ben Schamisso
By Ben Schamisso
August 24, 2020
The president is emulating his 2016 strategy but analysts say he may look out of touch since polls show immigration isn't a high priority for voters.
SHOW TRANSCRIPT

President Trump is doubling down on his anti-immigration rhetoric as part of his reelection strategy.

"We're finding the drug dealers, traffickers, predators, and we're throwing them to hell in jail or sending them back home," he said at a recent rally near the border in Arizona.

The president's hard-line immigration stance helped him win the White House four years ago and he hopes to repeat the strategy this year.

But analysts say President Trump risks appearing out of touch by focusing on an issue that isn't high on voter lists of priorities.

Still, with inflammatory speeches and ads, the Trump campaign is multiplying their attacks on Joe Biden's immigration platform.

"Biden's plan is the most radical, extreme, reckless, dangerous, and deadly immigration plan ever put forward by a major party candidate," President Trump said during the Arizona rally.

"It's definitely not nearly as far left to some of the other plans that we saw during the primary. And I think that really should give pause to anybody who's trying to paint it as the most extreme plan," said Cristobal Ramon, a senior policy analyst at the Bipartisan Policy Center.

Still, analysts say that Biden has to walk an awkward line when addressing immigration.

"On the one hand, there's the progressive wing of the party that wants to liberalize immigration. But on the other hand, there's a lot of Americans that are concerned about their futures and use immigration as a scapegoat for economic and security problems," said Pierce.

According to a Newsy/Ipsos July poll, immigration is now less important to voters than the pandemic, the economy, health care, racial inequality, climate change and education.

But the same poll also shows that immigration remains a much more important issue to Republicans than to Democrats.

And President Trump has long sought to capitalize on divisive issues that play well to his base.