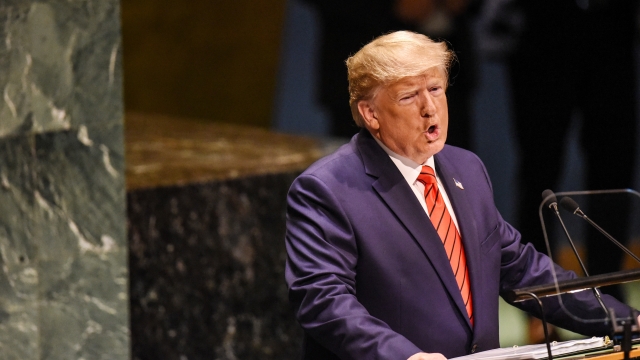 President Donald Trump continued to push his "America first" agenda in his third speech to the United Nations general assembly.

"The United States, after having spent over $2.5 trillion since my election to completely rebuild our great military, is also by far the world's most powerful nation. Hopefully it will never have to use this power," President Trump said.

In his speech Tuesday, the president touched on a wide array of topics, including international trade, religious freedom, and denuclearization of the Korean peninsula. President Trump had strong words for China, criticizing the country for its trade and economic practices.

"The second largest economy in the world should not be permitted to declare itself a developing country in order to 'game the  system'" President Trump said.

On Iran, the president said he's open to having a positive, friendly relationship. But he called on the country to stop supporting terrorism and wars in other countries.

"Iran's leaders will have turned a proud nation into just another cautionary tale of what happens when a ruling class abandons its people and embarks on a crusade for personal power and riches," President Trump said.

The president also highlighted one of his frequent talking points — illegal immigration. He appeared to criticize American lawmakers who don't support his border security plans. But he also spoke directly to the migrants who might try to come to the U.S. illegally.

Throughout his speech, the president encouraged all the world's leaders to prioritize their own countries first.

"My fellow leaders, the path to peace and progress and freedom and justice and a better world for all humanity begins at home," President Trump said.