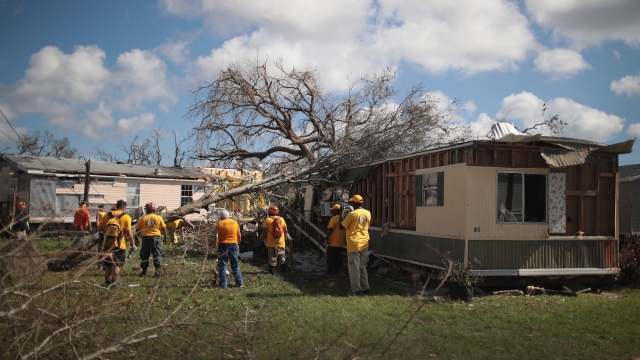 SMS
Trump Promises $448 Million In Disaster Relief To Florida
By LeeAnne Lowry
By LeeAnne Lowry
May 9, 2019
The funds would be used to help the community recover from Hurricane Michael.
SHOW TRANSCRIPT

The funds would be used to help the community recover from Hurricane Michael — the category 5 storm that made landfall last October.

But this funding package has stalled in Congress because it also includes relief for Puerto Rico, which was hit by two hurricanes in 2017. At the rally, President Trump criticized Democrats for wanting to give more money to the U.S. territory.

"Puerto Rico got 91 billion dollars and I understand they don't like me. It's the most money we've ever given to any any— anybody."

But that number is misleading. Puerto Rico has received only $11 billion in relief so far. The $91 billion figure refers to a high-end internal estimate of how much the disaster could cost over time.