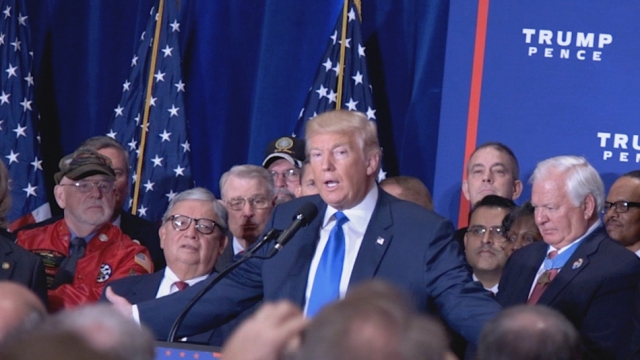 SMS
Donald Trump Just Gave A Master Class In How To Play The Media
By Kate Grumke
By Kate Grumke
September 16, 2016
He promised to talk about the birther movement. Instead, journalists mostly participated in a commercial for his new hotel.
SHOW TRANSCRIPT

We're at Donald Trump's new hotel in Washington, D.C., and he just gave a master class in how to play the media. Trump held his first press conference at that hotel Friday — but he didn't take questions.

He's now got an address on Pennsylvania Avenue down the street from the White House and a fancy, gold-plated ballroom so he can speak directly to the press in one of the country's big media hubs.

And it's probably no coincidence he wants the press to generate some free buzz about the hotel.

"Nice hotel ... under-budget and ahead of schedule," Trump said.

For the first half-hour at the event, Trump let members of Veterans for Trump talk about how great they think he is. And the cable networks ran it.

However, those networks don't typically show that kind of thing. They switch back when the candidate starts speaking, but that didn't happen this time.

After that, he talked for less than five minutes about the thing he baited journalists with.

"Obama was born in the United States. Period," Trump said.

Trump knows how to use the press, and at his new hotel, he's definitely taking advantage.