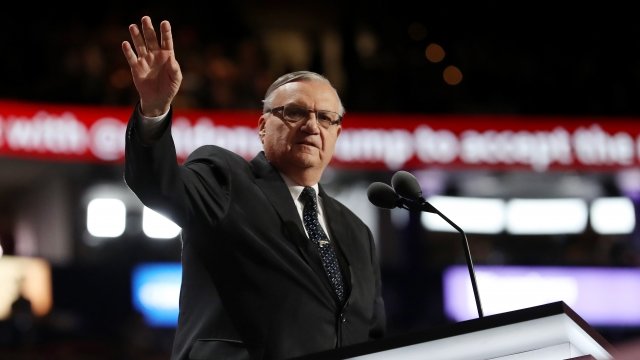 We sort of knew it was coming. Trump told Fox News earlier this month he was "seriously considering" the pardon. And the president brought it up again during an Aug. 22 rally in Phoenix.

"I won't do it tonight because I don't want to cause any controversy; is that OK? All right? But Sheriff Joe should feel good," Trump said.

Often called "America's toughest sheriff," Arpaio was found guilty of criminal contempt after his department ignored a court order to stop what a judge ruled were racial profiling practices. He was scheduled to be sentenced in October.

The White House statement said Arpaio spent his life "protecting the public from the scourges of crime and illegal immigration." It also said, "After more than fifty years of admirable service to our Nation, he is a worthy candidate for a Presidential pardon." 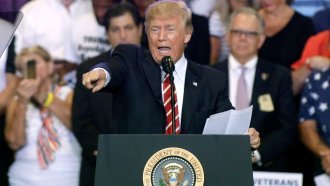 After Fiery Rally, Trump Turns To The Military For Unity

The Constitution gives the president broad power to forgive a person of a crime. But the Justice Department says pardons are typically granted for felony offenses — not misdemeanor convictions.

That's because a person convicted of a felony loses many civil rights, including getting to vote and serve on a jury. A misdemeanor conviction doesn't result in that same loss.

The department also says petitioners should wait at least five years after their conviction or release from confinement before submitting their request for a pardon. Arpaio was convicted in July.

This is the first pardon Trump has given during his presidency. His predecessor, Barack Obama, granted 212 pardons during his eight years in office.