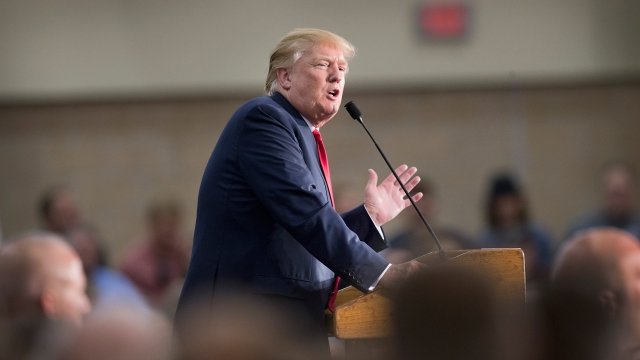 SMS
Trump Says The Steele Dossier Launched The Mueller Probe — It Didn't
By James Packard
By James Packard
July 26, 2018
The president made the claim after the release of documents related to FBI surveillance of a former aide.
SHOW TRANSCRIPT

President Donald Trump is repeating a debunked argument about the Russia probe, this time using the recent release of the FBI's request to surveil his former aide, Carter Page.

Trump said on Twitter, "So we now find out that it was indeed the unverified and Fake Dirty Dossier, that was paid for by Crooked Hillary Clinton and the DNC, that was knowingly & falsely submitted to FISA and which was responsible for starting the totally conflicted and discredited Mueller Witch Hunt!"

OK, he says a lot there, but let's home in on this point: He claims the dossier put together by former British spy Christopher Steele was used as reason to start the special counsel's investigation.

The special counsel didn't come into the picture until May 2017. Even if we give the president the benefit of the doubt and assume he meant the dossier was used as justification for the Russia investigation at large, he'd still be wrong.

It was the actions of former Trump aide George Papadopolous that started the FBI's probe into links between the Trump campaign and Russia. Papadoupolous reportedly told an Australian diplomat that Russia had dirt on Hillary Clinton. Australian authorities relayed that information to U.S. officials, according to The New York Times.

To tie the Carter Page surveillance to the start Mueller probe is a big, inaccurate jump.