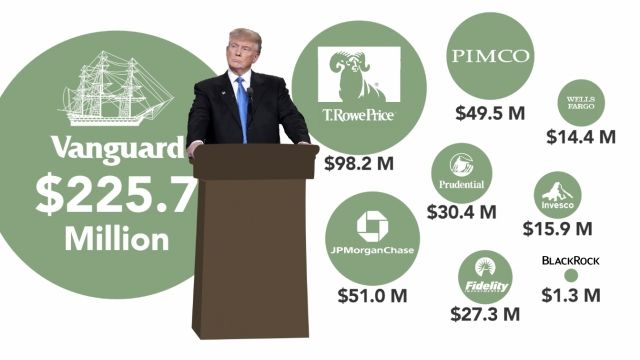 SMS
Unless He Divests, Trump Will Owe Wall Street Hundreds Of Millions
By Zach Toombs
By Zach Toombs
January 18, 2017
Banks like Wells Fargo will be regulated by Trump's appointees. Those banks also hold millions in debt from the new president.
SHOW TRANSCRIPT

Ethics experts from both the Bush and Obama administrations say Donald Trump must sell off his personal stake in his company or at least turn it over to an independent trustee.

"It's time for the president to focus on his job and divest from those business enterprises," said George W. Bush's ethics lawyer Richard Painter on MSNBC.

Here's an example. One of the oldest concerns about money in politics is the fear that politicians might owe wealthy benefactors. In Trump's case, reporting from The Wall Street Journal shows he literally owes hundreds of millions of dollars to Wall Street firms and banks, including Vanguard, JP Morgan Chase, Wells Fargo and others.

If he defaulted on any of those loans, these banks would have immense leverage over him. As long as he's attached to his business, he's vulnerable to foreclosure and financial threats from some of the world's most powerful banks. And there are other ways these companies could influence Trump — like Wells Fargo.

While the bank is under scrutiny for charges of widespread fraud, Wells Fargo also holds millions in debt from Trump — and he'll be the one appointing the government officials tasked with regulating the bank.

And because Trump won't release his tax returns like every president of the past few decades, there could be more financial conflicts we don't know about.