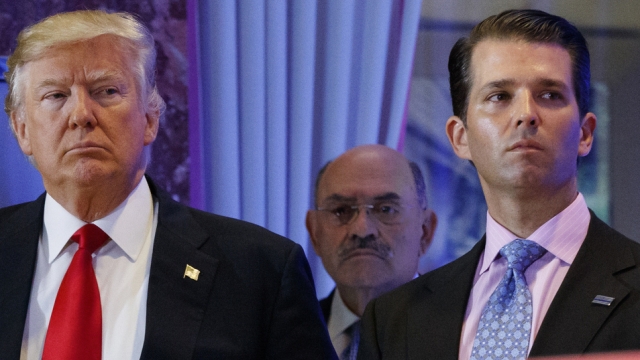 Weisselberg was seen walking into the the courthouse in lower Manhattan around 6:20 a.m. with his lawyer.

New York prosecutors are expected to announce the first criminal indictment Thursday in a two-year investigation into Trump's business practices, accusing his namesake company and Weisselberg of tax crimes related to fringe benefits for employees.

The charges against the Trump Organization and its chief financial officer, Allen Weisselberg, remained sealed Wednesday night but were to be unveiled ahead of an afternoon arraignment at a state court in Manhattan, according to two people familiar with the matter.

The people were not authorized to speak about an ongoing investigation and did so on condition of anonymity.

There was no indication Trump himself would be charged at this stage of the investigation, jointly pursued by Manhattan District Attorney Cyrus Vance Jr. and New York Attorney General Letitia James, both Democrats.

Trump did not respond to reporters’ shouted questions about the New York case as he visited Texas on Wednesday, but earlier in the week, the Republican had blasted the New York prosecutors as “rude, nasty, and totally biased” and said his company’s actions were “standard practice throughout the U.S. business community, and in no way a crime.

”The planned charges were said to be linked to benefits the company gave to top executives, like the use of apartments, cars and school tuition, the people familiar with the matter told the AP.

Vance, who leaves office at the end of the year, has been conducting a wide-ranging investigation into a variety of matters involving Trump and the Trump Organization.

His office has looked into hush-money payments paid to women on Trump’s behalf and truthfulness in the company's property valuations and tax assessments, among other matters.

Vance fought a long battle to get Trump’s tax records and has been subpoenaing documents and interviewing company executives and other Trump insiders.