Trump Orders The Creation Of A 'Space Force' Military Branch 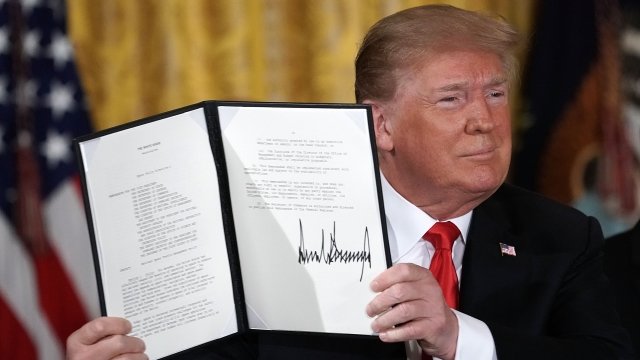 SMS
Trump Orders The Creation Of A 'Space Force' Military Branch
By Briana Koeneman
By Briana Koeneman
June 18, 2018
Trump announced the decision during a meeting of the National Space Council at the White House on Monday.
SHOW TRANSCRIPT

President Donald Trump has ordered the creation of a new military branch that would deal with space-related operations.

"Very importantly, I'm hereby directing the Department of Defense and Pentagon to immediately begin the process necessary to establish a Space Force as the sixth branch of the armed forces. That's a big statement," Trump said.

Trump announced the decision during a meeting of the National Space Council at the White House Monday.

Trump first proposed the idea of a space-focused military branch back in March.

He and some lawmakers argued China and Russia are better equipped to conduct space-related operations and that the U.S. will lag behind unless it puts more resources in space defense. But defense experts said the new branch wasn't feasible from a monetary perspective.

The Pentagon and the Air Force didn't immediately respond to requests for comment.