Trump On Cruz As Vice President: 'It's Something We Can Think About' 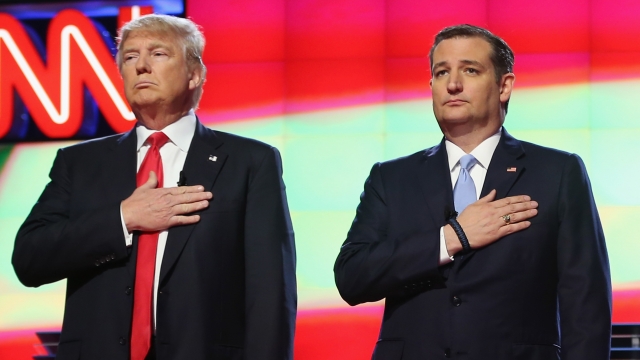 SMS
Trump On Cruz As Vice President: 'It's Something We Can Think About'
By Briana Koeneman
By Briana Koeneman
May 5, 2016
On Wednesday, Donald Trump told Fox News he believes Ted Cruz is "certainly a capable guy."
SHOW TRANSCRIPT

Presumptive Republican nominee Donald Trump has confirmed his campaign is starting to put a list of potential vice presidential candidates together.

And he says he isn't ruling out former opponent Ted Cruz.

Trump said during an interview on "The O'Reilly Factor" Wednesday he has no hard feelings against Cruz, who dropped out of the race shortly after Trump won Indiana's GOP primary.

But Cruz isn't the only former Republican presidential candidate Trump is eyeing as his running mate.

Sources told CNN that Ben Carson, yet another former GOP candidate, will be part of a committee that will help Trump make his potential VP pick before the Republican National Convention in July.

According to The New York Times, Chris Christie, Newt Gingrich, Ben Carson and Mary Fallin have all said they'd be interested in running with Trump.

This video includes clips from Donald J. Trump for President Inc. and PBS NewsHour, and images from Getty Images.