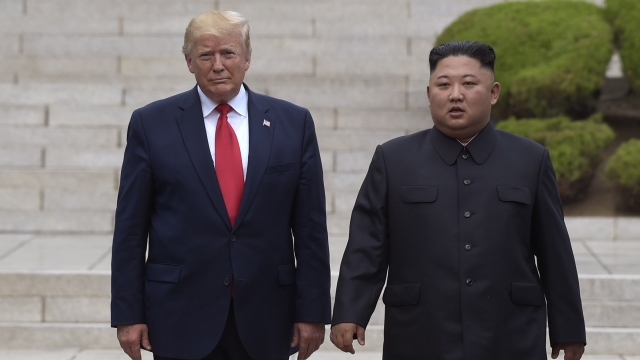 SMS
Trump Offers 'Anti-Epidemic' Aid To North Korea
By Bailey Vogt
By Bailey Vogt
March 22, 2020
Kim Jong-un's sister applauded President Trump for sending the letter with the "challenges [that] lie ahead in the way of developing ties."
SHOW TRANSCRIPT

Kim's sister Kim Yo-jong said Sunday President Trump offered his cooperation in a personal letter to the North Korean leader. She praised the president on state media for reaching out when “big difficulties and challenges lie ahead in the way of developing ties" between the two countries.

She said President Trump offered to “propel the relations between the two countries" forward and "expressed his intent to render cooperation in the anti-epidemic work.”

The White House confirmed the letter to The Associated Press, saying it matched up with President Trump's goal of working with world leaders during the pandemic.

North Korea insists it hasn't had a case of coronavirus. However, many experts doubt that claim and worry how the country's dysfunctional health care network would handle an outbreak.