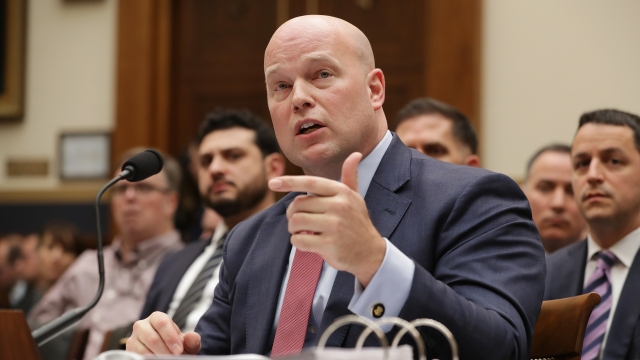 President Donald Trump called a New York Times story "fake news" after a reporter asked him if he'd tried to replace the person in charge of an investigation tied to him.

That Times report says late last year, President Trump asked then-acting Attorney General Matthew Whitaker if U.S. Attorney Geoffrey Berman, a known supporter of President Trump, could take over an investigation into two women's claims that they had affairs with Trump. President Trump's former lawyer Michael Cohen has said he made payments to cover up Stormy Daniels and Karen McDougal's stories at the president's direction.

A reporter asked the president about the story Tuesday after he signed a policy directive to create a Space Force military branch. President Trump said he never asked Whitaker to replace the head of the investigation and called the Times report "fake news." When asked about his relationship with Whitaker, the president said it's "very good."

"I have a lot of respect for Mr. Whitaker. I think he's done a great job. He's a very, very straight shooter. I watched him during the hearing, some of it, I thought he was exceptional. He's a very fine man and he should be given a lot of thanks by our nation," President Trump said.

A DOJ spokeswoman told The New York Times that the White House did not ask Whitaker to interfere in the investigation. Whitaker said the same thing under oath to the House Judiciary Committee. But now, House Democrats are reportedly looking into whether Whitaker lied in court.