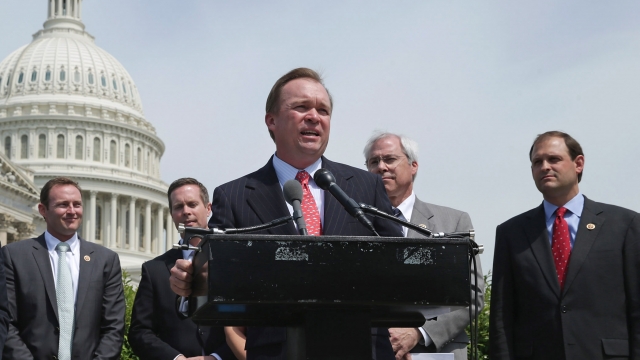 SMS
Trump Picks A Member Of The 'Shutdown Caucus' As His Budget Director
By Ethan Weston
By Ethan Weston
December 17, 2016
In the past, U.S. Rep. Mick Mulvaney said he'd rather let the government shut down than pass a measure to raise the debt ceiling.
SHOW TRANSCRIPT

Donald Trump has picked Rep. Mick Mulvaney — a conservative House Republican from South Carolina — to head the Office of Management and Budget.

Mulvaney was first elected in 2010 and has been an advocate for large spending cuts ever since, even embracing the phrase "Shutdown Caucus" because he said he would rather let the government shut down than raise the national debt limit.

The president-elect called Mulvaney a "tremendous talent, especially when it comes to numbers and budgets."

If the Senate confirms Mulvaney, he would help guide a few of Trump's measures through Congress, like tax overhauls, the proposed repeal of Obamacare and other spending requests.