Trump Might Go Around Congress To Meet His Wall Funding Goal 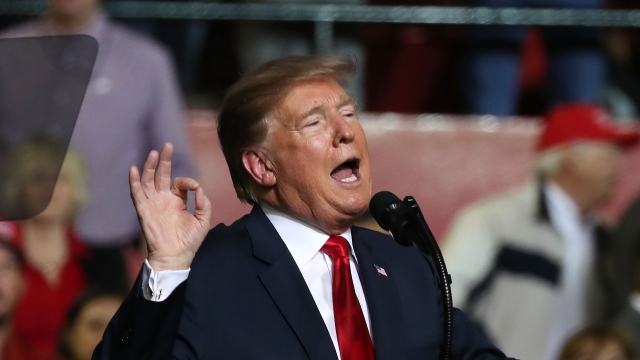 SMS
Trump Might Go Around Congress To Meet His Wall Funding Goal
By Matt Picht
By Matt Picht
February 12, 2019
President Trump's plans for a border wall are being held up in Congress — so the White House is looking for other ways to fund it.
SHOW TRANSCRIPT

President Trump hasn't been able to convince Congress to fully fund his plans for a border wall. And that's sent the White House looking for alternative sources of funding.

A deal struck in Congress sets aside about $1.3 billion for new construction on the border. That's well short of the $5.7 billion that the president demanded — but it might be his only option to avoid another government shutdown.

The White House might be able to fill in the gaps itself, using money that's already been approved by Congress but hasn't been spent yet. The administration is reportedly looking at using money earmarked for disaster relief efforts in areas like in California and Puerto Rico. Pentagon funds for military construction projects might be on the table as well.

Redirecting those funds with an executive order would allow Trump to meet his border wall goal without declaring a national emergency. But the move would still face similar legal challenges — the Constitution is very clear that Congress is in charge of how federal money is spent.

And the president's Republican allies in Congress are extremely skeptical of such a move, worried that it could embolden future Democratic presidents to take similar steps.

Sen. James Lankford told CNN: "I would oppose that and under this president as well. If he moved money to where it was clearly not intended to be."

The border deal reached in Congress also reportedly includes $1.7 billion in new funding to the Department of Homeland Security for added security and personnel. Trump has been lukewarm about whether he'll sign the bill.