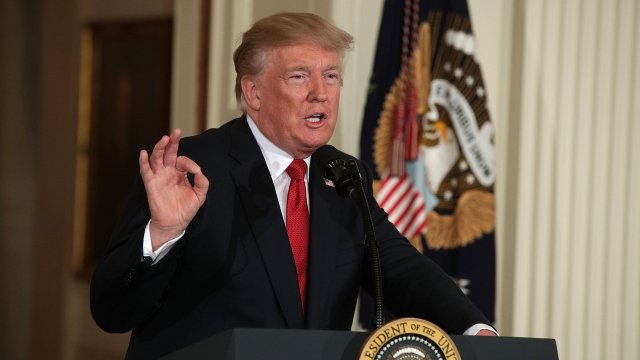 The president's legal team could be offering a sit down to the special counsel in the next couple of months.

President Trump promised to chat under oath with the special counsel for the Russian investigation this spring. Well, that talk could be coming to fruition sooner than we all thought.

Trump's lawyers are apparently open to having him sit down with Bob Mueller — possibly even pushing the issue if Mueller doesn't make a request by Thanksgiving.

This move is a bit of a surprise for people who have been following the probe, but the president's lawyers seem to have moved to being more cooperative with the special counsel's team. And offering up the president a way of both trying to speed up the investigation and signal they don't believe the president has anything to hide.

Either way, the president meeting with Mueller could bring about some political and possibly legal issues. Trump has a history of bending the truth, especially when he's under pressure or angry. Even one untrue statement while under oath could trigger perjury charges and possibly impeachment proceedings.

A senior White House official told Politico: "Whatever happens with regard to whether or not, or how, the special counsel might want to interview the president, there's no reason to expect that would be combative."

Basically three different types of investigations can happen outside the purview of the Executive Branch.

Except there are multiple reasons to expect it to be combative. The president has constantly tweeted his anger that there even is an investigation, and privately the president has talked about wanting to fire Mueller.

Whether Trump volunteers or not, the vast majority of experts say if Mueller wants an interview with the president, he's going to get it. Since Watergate, every single president other than Barack Obama was involved in a federal criminal investigation of some sort. And all, except Bush 41 agreed to be questioned.