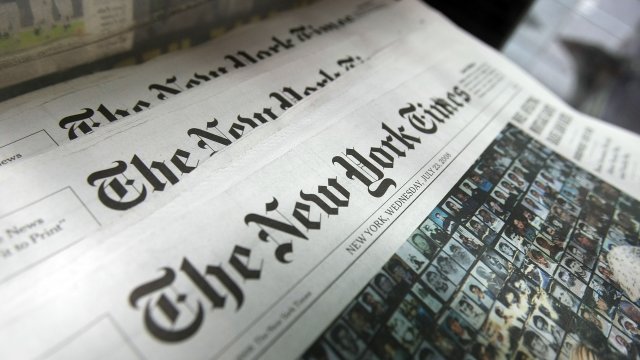 SMS
New York Times Publisher Releases Notes On Meeting With Trump
July 29, 2018
According to a statement, A.G. Sulzberger met with President Trump to discuss several concerns he had with the president's "anti-press rhetoric."
SHOW TRANSCRIPT

The New York Times published its notes from what President Donald Trump called a "very good and interesting meeting" between himself and the Times publisher Sunday morning.

According to a statement, publisher A.G. Sulzberger met with Trump to discuss several concerns he had with the president's "deeply troubling anti-press rhetoric."

The meeting was originally meant to be off the record. But Trump tweeted about it, saying the two spent "vast amounts of time" discussing fake news.

Sulzberger says he addressed the concept of 'fake news,' but focused more on the phrase "enemy of the people." He said describing the press as such undermined "the democratic ideals of the nation."

He says he told Trump it was "inflammatory language" that contributed to the rise of threats toward journalists – not just in the states, but in other countries where governments use similar rhetoric to crack down on the press.

A White House spokesperson confirmed the meeting took place, but didn't give any further details on what was discussed.

As for Sulzberger, he says he told the president to speak up if he feels the Times'  is unfair, but to "reconsider" making broad attacks on journalism.