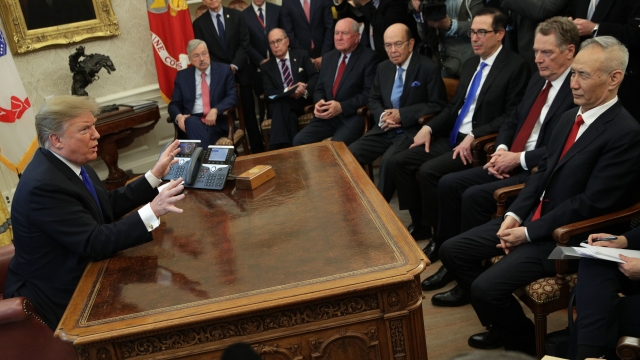 With a tariff deadline fast approaching, the U.S. and China have reached a deal on currency issues, following a meeting of President Donald Trump and Chinese Vice Premier Liu He Friday.

Treasury Secretary Steve Mnuchin said U.S. and Chinese negotiators have reached a deal to stabilize currency – one of many sticking points in the ongoing trade talks. And President Trump told reporters the trade talks overall are going well.

Mnuchin said Chinese negotiators are going to say in Washington D.C. through the weekend. The U.S. and China have a week left to make a trade deal by the March 1 deadline.

And President Trump said he is open to meeting with Chinese President Xi Jinping sometime in March if talks are still progressing.

If they don't strike a deal, the U.S. will raise the tariffs on $200 billion worth of Chinese goods from 10 percent to 25 percent. Last week, President Trump said he would consider delaying Chinese tariff hikes if talks go well, but that he's "not inclined to do that."