Trump May Announce Billions In Tariffs On Chinese Imports This Week 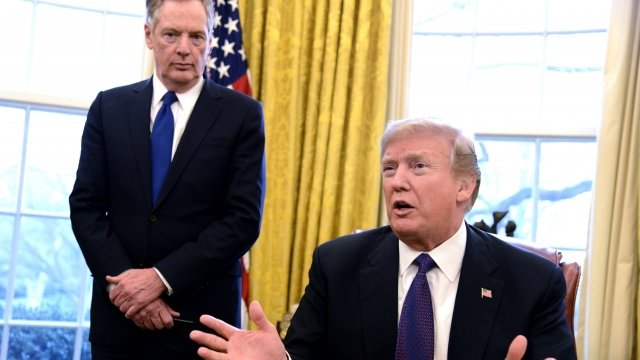 SMS
Trump May Announce Billions In Tariffs On Chinese Imports This Week
By Jake Jones
By Jake Jones
March 21, 2018
Dozens of American companies have tried to dissuade the president from imposing blanket tariffs on Chinese goods.
SHOW TRANSCRIPT

President Donald Trump could unveil massive tariffs against China as early as Thursday.

The entire package is expected to impose between $30 billion and $50 billion in tariffs on Chinese imports. It would be in response to a recent U.S. investigation that found China unfairly forces U.S. businesses to turn over valuable technology before doing business within Chinese borders.

But the tariffs could have a negative impact on the U.S. economy. Dozens of American companies signed a letter trying to dissuade Trump from imposing blanket tariffs on Chinese goods. There's also fear Beijing might retaliate with tariffs on U.S. agricultural products, igniting a full-scale trade war.