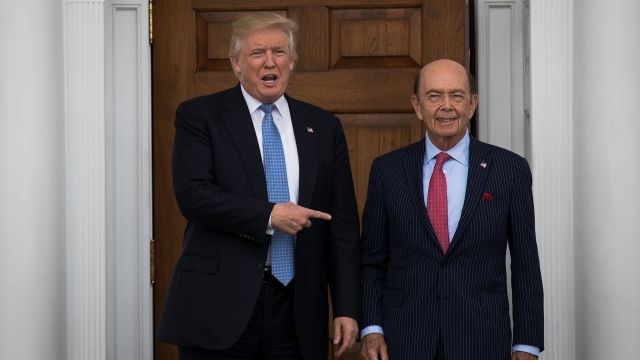 Just look at a few of his top picks.

President-elect Donald Trump's Cabinet is slowly coming together. And so far, many of his picks have one thing in common: They're very, very rich.

And if this trend continues, Trump could have the wealthiest administration in modern U.S. history.

Just look at a few of the people he's already chosen for the top spots.

He announced Steve Mnuchin as secretary of the treasury. He just so happens to be a former Goldman Sachs executive who has since financed several hit movies. His estimated net worth? $40 million.

Trump tapped billionaire investor Wilbur Ross to be his secretary of commerce. Forbes estimates his net worth is $2.5 billion.

And they join a group of other extremely wealthy people, including Chicago Cubs co-owner Todd Ricketts, major GOP donor Betsy DeVos and former Secretary of Labor Elaine Chao, who is also the wife of Senate Majority Leader Mitch McConnell.

Granted, President Barack Obama's commerce secretary is worth over $2 billion.

And many thought George W. Bush's 2001 cabinet was pretty darn rich. All together, the group had an inflation-adjusted net worth of about $250 million.

But, as The Wall Street Journal points out, that's "roughly one-tenth the wealth" Ross alone has under his belt.

Still, some are concerned a Cabinet full of billionaires could be bad news for the American people.

As a writer for Vanity Fair put it: "Working-class Americans stand to lose a lot when billionaires are put in charge of the nation's executive branch. Running a country is not like running a business."

Trump is expected to announce his remaining Cabinet picks soon.