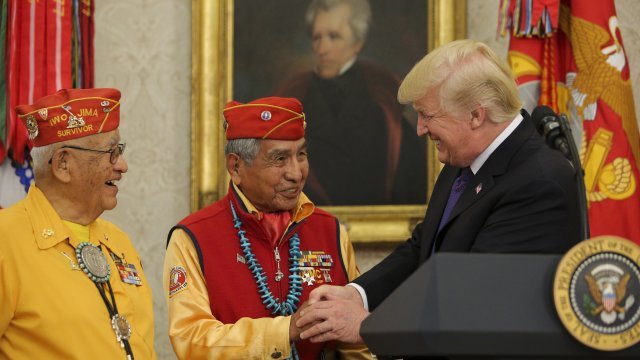 Trump told the veterans: "I just want to thank you because you are very, very special people. You were here long before any of us were here. Although we have a representative in Congress who they say was here a long time ago. They call her Pocahontas." 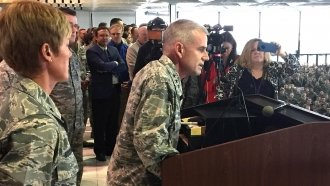 As Schools Struggle With Hate, The Air Force Academy Takes A Stand

Trump made the crack while standing beside World World II Navajo code talkers. The code talkers helped U.S. Marines send secret military messages using their native language. It was successful, proving extremely difficult for the enemy to understand or decrypt.

Warren, who has said she is part Native American, has been mocked as "Pocahontas" by Trump for allegedly making false claims about her heritage.

Calling someone "Pocahontas" as a shorthand for "Native American" is considered offensive by some groups. The National Congress of American Indians considers it a racial slur in certain circumstances and has opposed Trump's use of the word in reference to Warren.

Warren replied Monday, "It is deeply unfortunate that the president of the United States cannot even make it through a ceremony honoring these heroes without having to throw out a racial slur."

The White House responded to the incident Monday, saying that it doesn't believe "Pocahontas" is a racial slur.