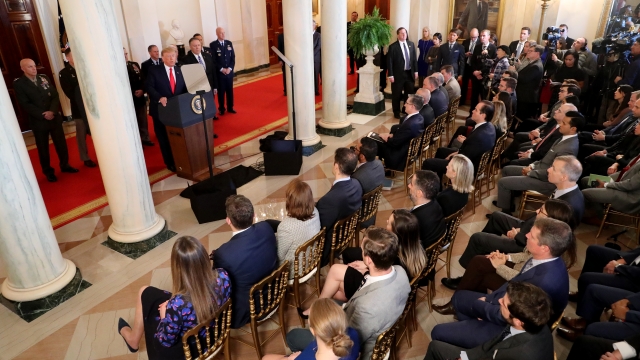 "As long as I am president of the United States, Iran will never be allowed to have a nuclear weapon," President Trump said.

That was the first public comment from President Donald Trump after the Iranian missile attack Tuesday in Iraq.

"We suffered no casualties, all of our soldiers are safe, and only minimal damage was sustained at our military bases," Trump said.

"The United States military eliminated the world's top terrorist, Qasem Soleimani.  As the head of the Quds Force, Soleimani was personally responsible for some of the absolutely worst atrocities," Trump said.

The president criticized the Iran nuclear deal and talked about the strength of the U.S. economy. He also said he would ask NATO to become more involved in the Middle East peace process.

"To the people and leaders of Iran: We want you to have a future and a great future — one that you deserve, one of prosperity at home, and harmony with the nations of the world. The United States is ready to embrace peace with all who seek it," President Trump said.