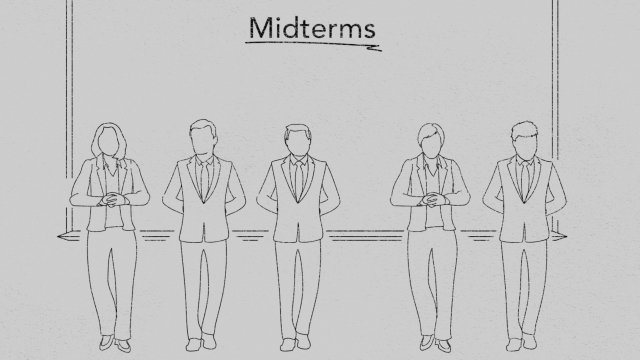 Ah, midterm elections ... a time for people to show up and give our country's leaders a progress report. Though every midterm is a teensy bit different, there's one thing they all have in common: They don't typically go well for the party in power.

Since the end of the Civil War, we've had 38 midterm elections. In 35 of those, the president's party has lost seats in the House — that's 92 percent.

And now that the 2018 midterms are speeding toward the finish line, let's take a look at our current field of play.

We'll start at the top: Midterms tend to end up as a referendum on the current president's job performance.

Any time the White House's approval rating dips below 50 percent, the president's party usually loses two dozen or more seats in the House. 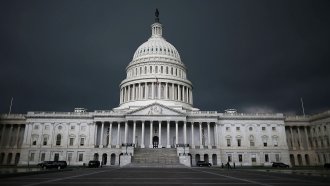 That's bad news for Team Trump. Despite wins on taxes, lots of deregulation and a healthy economy, Trump's aggregate approval rating typically hovers in the low 40s. The constant scandals might have something to do with that.

Trump's unpopularity could really boost Democrats in the elections — they've been outraising and overperforming in special elections across the country. And a wave of retiring GOP incumbents have tilted the odds in Democrats' favor even more.

But the party's still struggling to find a consistent message other than "we're not Trump." Those intraparty differences could come back to haunt Dems at the voting booth.

So what's at stake in 2018? Let's take a look at the four main election categories: state and local; gubernatorial; U.S. Senate; and U.S. House of Representatives.

State legislatures tend to go under the radar, but they hold a lot of power. They'll be redrawing the congressional map in two years, for one thing.

Democrats flipped 33 state seats in 2017, but they've got a lot of catching up to do. The party has lost more than 1,000 state elections over the past decade.

There are 36 seats in the executive branch of states that will have races this year; most of them are incumbent GOP spots, so they're also relatively safe to keep control of the vast majority of those, especially the ones in red states.

Also likely safe is the Republican majority in the Senate, and that's mostly because it's a numbers game. Dems are just protecting a ton more seats this year — 26 to the GOP's nine. And quite a few of those Dems' seats are in states President Trump won.

The real drama looks set to happen in the House. All 435 representatives will be on the ballot, and Democrats need to flip just 24 of those seats to take control.

Since 23 of those GOP-held districts voted for Hillary Clinton in 2016, Democrats are feeling pretty good about their chances.

But that's not a guarantee — Republicans could still start capitalizing on their accomplishments in power, or Democrats could really fumble their momentum.

So ignore anyone who tells you they know exactly how the midterms will turn out. Hardly anything is "for sure" in politics — you'd think we'd have learned that by now.