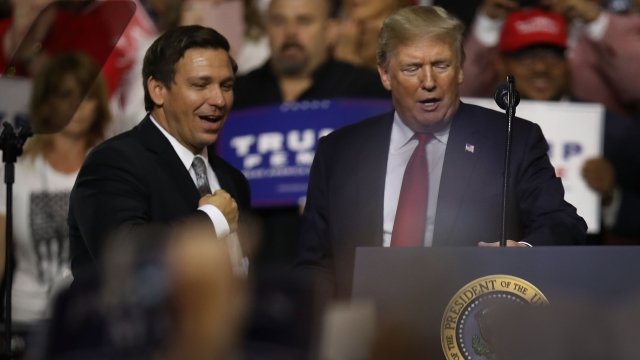 SMS
Republicans Run Towards Trump In Arizona, Florida Primaries
By Matt Picht
By Matt Picht
August 28, 2018
Primaries in Arizona and Florida offer another indication of how President Trump is shaping the 2016 midterms.
SHOW TRANSCRIPT

President Trump has cast a long shadow over the 2018 midterm elections, including in Tuesday's primary races in Arizona and Florida.

Larry Sabato, director of the University of Virginia Center for Politics, told reporters Tuesday: "I laugh when I read these stories about, 'Oh, Republicans are going to localize the election.' You can't localize anything with Donald Trump in the White House!"

In Arizona, Rep. Martha McSally is battling politician Kelli Ward and ex-Sheriff Joe Arpaio to replace retiring Sen. Jeff Flake. All three candidates have tried to position themselves as Trump's favored pick — but so far the president hasn't offered a clear endorsement in the race.

Kyle Kondik, managing editor of Sabato's Crystal Ball, an election prediction site, told Newsy: "Trump kind of seemed to endorse Ward a long time ago, and then he kind of backtracked from that. ... McSally is the best bet to be able to hold the seat in the fall against Kyrsten Sinema, who is a Democrat, another member of the U.S. House. ... My guess is national Republican operatives have been working around the clock to prevent the president from wading in if he was going to wade in not for McSally."

The death of Arizona's longtime Sen. John McCain has cast a pall over the final days of the race: Arizona Governor Doug Ducey is set to appoint his replacement next week. But none of the candidates currently running for Flake's seat seems eager to extol McCain's legacy.

Kondik said, "McCain, by the end of his life and actually for many years before that, was a person who often seemed to be liked by independents and Democrats a little bit more than Republicans. ... I'd say that Trump is more indicative of the future of the Republican Party than John McCain is, than John McCain's legacy is." 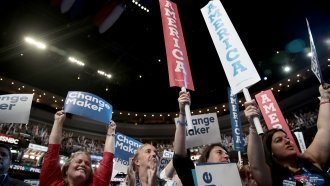 Trump's influence over the GOP is particularly noticeable in Florida's gubernatorial primary. Republican Rep. Ron DeSantis has climbed to a slim lead in the polls over the establishment-backed candidate Adam Putnam, largely on the basis of his strong support from Trump.

Democrats are struggling with their own party divisions in that race: former U.S. Rep. Gwen Graham has taken a narrow lead against her more left-leaning challengers with a bid to peel centrist voters away from the GOP.

Kondik said, "Going forward in the fall, it's possible that you could have a more centrist Democratic candidate in Gwen Graham vs. a kind of a Trump-ish candidate in Ron DeSantis. And I think Democrats would like that contrast, even though Florida's such a competitive state that I don't think either would enter as a favorite in the general election."