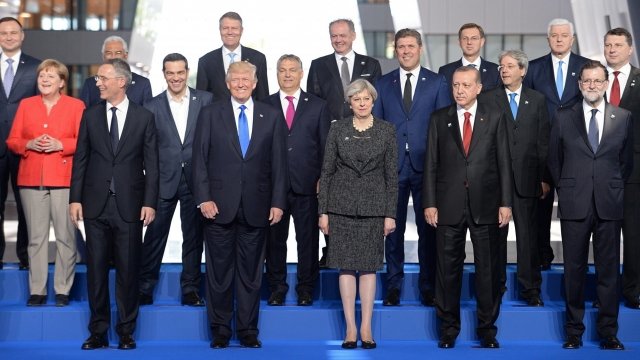 Ahead of his trip to Belgium next week for the NATO Summit, President Donald Trump reportedly sent out letters to some of the United States' closest allies accusing member countries of not spending enough on defense.

That's according to a report from the The New York Times out Monday that said Trump sent "sharply worded" letters in June to countries including Belgium, Canada, Germany, and Norway.

Unnamed sources told The Times that Trump wrote in a letter to German Chancellor Angela Merkel that some allies have yet to increase spending and that the U.S. is growing frustrated.

He's referring to an agreement made between members in 2014 to spend a minimum of 2 percent of their gross domestic product on defense. This isn't the first time Trump has criticized NATO countries for not spending enough.

Last year while in Brussels for a meeting with NATO nations, Trump made similar remarks to members in a speech.

"Twenty-three of the 28 member nations are still not paying what they should be paying and what they're supposed to be paying for their defense," said Trump.