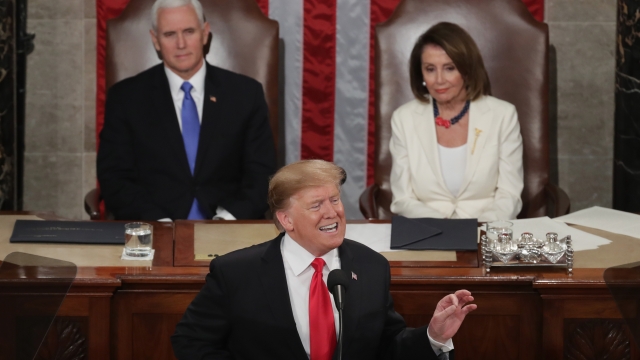 SMS
Trump Quiet On Border Emergency Declaration (For Now)
By Matt Picht
By Matt Picht
February 6, 2019
President Trump's State of the Union speech didn't mention whether or not he'd declare a national emergency to pay for his proposed border wall.
SHOW TRANSCRIPT

One thing President Trump didn't mention during his State of the Union address was whether he'd fund his proposed border wall by declaring a national emergency.

Trump: "In the past, most of the people in this room voted for a wall — but the proper wall never got built. I'll get it built."

The president called on Congress to support an immigration package that includes money for a border wall. But he stopped short of saying he'd use emergency powers to unilaterally redirect existing funds towards building that wall.

That likely came as a welcome relief for Republican leaders in Congress, who've been warning President Trump the move could divide the party. Several GOP members worry an emergency declaration would only serve to embolden future Democratic presidents.

Republican Rep. Sean Duffy of Wisconsin told Newsy: "My question is how does some future president use this tool in a way that i might disagree with." 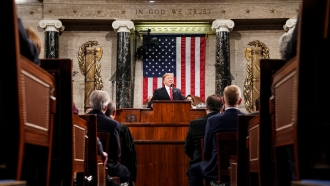 President Trump Calls For Bipartisanship In State Of The Union

Right now a bipartisan group is working to strike a possible compromise bill that could pass Congress and the White House before Feb. 15, the deadline to avoid another government shutdown.

President Trump has been publicly skeptical of Congressional efforts so far. White House officials said before the speech that the president might still declare an emergency if Congress can't come up with a deal.