President Trump Lashes Out At McCabe After '60 Minutes' Interview 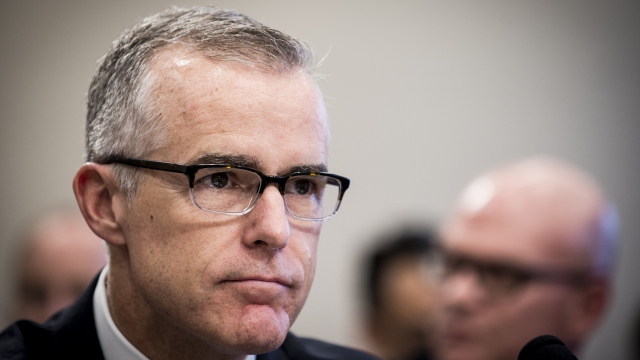 President Donald Trump is lashing out at Andrew McCabe in the wake of the former deputy FBI director's interview with "60 Minutes."

Hours after the interview aired on CBS Sunday, President Trump tweeted that McCabe was "fired for lying, and now his story gets even more deranged."

And he accused McCabe and Deputy Attorney General Rod Rosenstein of "planning a very illegal act."

During the interview, McCabe said DOJ officials talked about recruiting Cabinet members to invoke the 25th Amendment in 2017, not long after President Trump decided to dismiss then-FBI Director James Comey.

Invoking the 25th Amendment lets the vice president and a majority of Cabinet members remove a sitting president by declaring him "unable to discharge the powers and duties of his office."

McCabe also told CBS he ordered the FBI team investigating Russian election interference to expand its probe to look at whether President Trump obstructed justice. McCabe said he did that to make sure the Russia case was "on absolutely solid ground" in case he got fired.