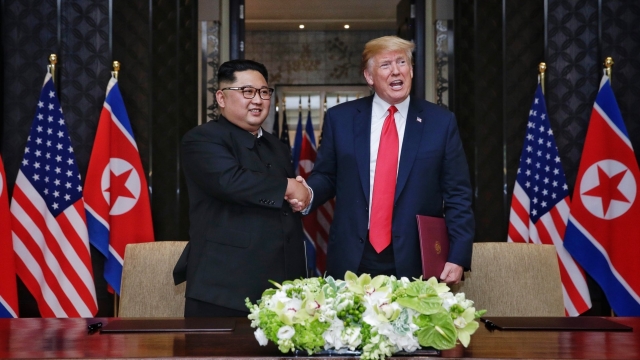 President Donald Trump is set to kick off his summit in Hanoi, Vietnam, with North Korean leader Kim Jong-un next week with a one-on-one session.

The two leaders last met at summit in Singapore last June, which was the first to take place between a sitting U.S. president and a leader of the DPRK.

They said Thursday that U.S. priorities for the encounter include: strengthening ties between the U.S. and North Korea, complete denuclearization, establishing a peace regime on the Korean peninsula and returning the remains of American soldiers killed in the Korean War.

The two leaders made a pledge to denuclearize during their first meeting, but negotiations have stalled somewhat over sanctions.

U.S. officials say there's currently not a clear, common definition of denuclearization, and no set timeline for the process.

Still, speaking to reporters Wednesday, the president appeared optimistic about the outcome.

"We've made a lot of progress. We've made a tremendous amount. That doesn't mean this is going to be the last meeting, because I don't believe it will. But we have subjects to discuss, which will be very fruitful, I believe," President Trump said.

One item that's not on the list yet is a withdrawal of U.S. troops from South Korea, which Kim's made clear is a sticking point.