Trump And Kim's Singapore Agreement Looks A Lot Like Past Agreements 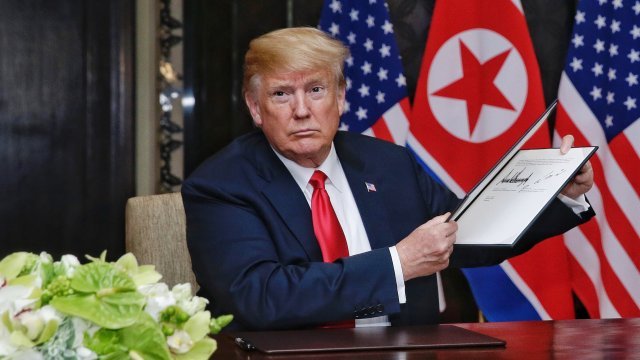 SMS
Trump And Kim's Singapore Agreement Looks A Lot Like Past Agreements
By Matt Picht
By Matt Picht
June 12, 2018
North Korea and the U.S. have signed plenty of denuclearization agreements before. The statement from the Singapore summit wasn't much different.
SHOW TRANSCRIPT

The meeting between President Trump and North Korean leader Kim Jong-un was a historic first. But the joint statement they signed at the end of their meeting was not — North Korea and the U.S. have signed very similar pacts in the past.

The key part of the deal is Kim's "unwavering commitment to complete denuclearization of the Korean Peninsula." That's a line we've heard before. The statement even mentions North Korea made a similar commitment during the recent inter-Korean summit in Panmunjom.

North Korea's been making broad commitments to denuclearization since at least as far back as 1992. But those agreements have tended to break down once it comes to the actual details of disarming. 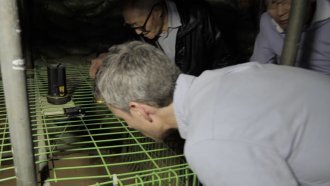 For Trump's part, he "committed to provide security guarantees" to the Kim regime in exchange. That's meant to reassure Kim that he won't regret giving up his nukes.

Similar statements made it into previous diplomatic efforts like the Agreed Framework and the Six Party Talks. It's not clear if North Korea ever really bought those promises. At any rate, they weren't enough to deter the country from pushing its nuclear program forward.

Yesterday's statement did add a new twist to denuclearization talks, though: Both sides recommitted to repatriating the remains of soldiers killed during the Korean War. Efforts to recover the remains of an estimated 5,300 U.S. soldiers left in North Korea have been largely stalled since 2005.

And while it's not in writing, Trump says he did secure a pledge from Kim to shutter a site for testing ballistic missiles.

Trump told reporters: "I said, 'Do me a favor, you've got this missile engine testing site, we know where it is. ... Can you close it up?' They're going to close it up."

Trump also said he's stopping the joint military exercises between the U.S. and South Korea — something the North has wanted for a long time. Military commanders in South Korea say they weren't aware Trump was calling off the exercises.