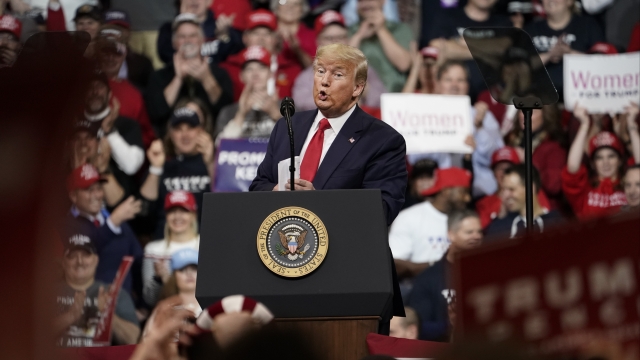 Between January 31 and Feb 6, Trump spent more on Facebook ads than at any point since the platform began publishing his advertising data.

From January 31 to February 6, President Donald Trump's campaign spent roughly $1.98 million on Facebook ads. The week had a string of big political and social events the President used to frame his messaging, which helped the campaign reach its single-largest weekly ad spend on the platform since Facebook's Ad Library began publishing numbers at the end of 2018.

On Feb. 5th, the Senate voted to acquit President Trump on the articles of impeachment. Trump ran ads afterward that framed impeachment as a "sham" and called viewers to donate or provide personal contact information. Trump's team ran at least 22,000 during the week.

Republicans aren't shy about mentioning impeachment in their ads — it's led to huge returns. Democrats haven't invoked it as heavily.

Trump also ran ads during the Iowa Democratic Caucus, calling the fallout there a "complete Democrat meltdown" and "chaos." Those ads asked users to submit personal information to his campaign, too.

And Trump's single most expensive Facebook ad spend day came the day before the Super Bowl, when he dropped $415,500. Those fundraising ads that day asked people to tune into a Super Bowl ad the next day, which the campaign had bought for an estimated $10 million. The language of the online ads suggested media outlets would attempt to suppress the television ad — which would have been against FCC regulations.

Many political social media ads are intended to drive donations or build up email lists. Impeachment-related ads seem to be especially good at it.

Even when they're massively expensive, ad strategies like these do seem to work. Republican strategists told the Washington Post the party ran successful ads that used impeachment as a frame for fundraising. The Republican National Committee told McClatchy between September 24 and Feb. 5, it brought in $117 million off online fundraising efforts, including through social media ads.