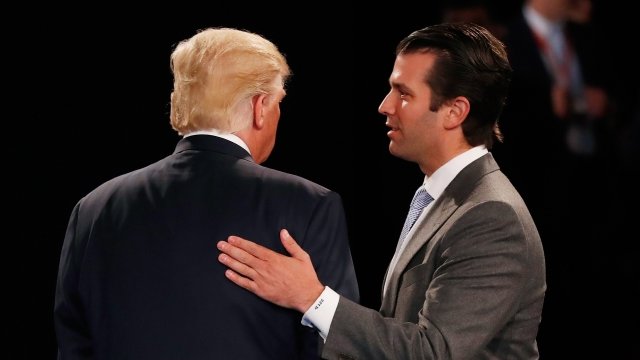 SMS
Trump Jr. Cites Attorney-Client Privilege In Russia Inquiry
By Newsy Staff
By Newsy Staff
December 7, 2017
Neither the president nor his son are attorneys, but Donald Trump Jr. says counsel was present during the phone call in question.
SHOW TRANSCRIPT

Donald Trump Jr. is reportedly invoking attorney-client privilege to keep from talking about a conversation he had with his father.

And yes, as Twitter keeps pointing out: Neither the president nor his son Donald Trump Jr. are lawyers.

But Trump Jr. told lawmakers Wednesday there were lawyers present during the conversation at issue.

About that conversation: The House intelligence committee is investigating a meeting Trump Jr. had with a Russian lawyer during the 2016 campaign. That Kremlin-connected attorney — we now know — promised team Trump unflattering information about Hillary Clinton. The revelation of the meeting, uncovered by The New York Times, was considered big news in many circles because critics said it proved the Trump campaign was willing to take help from a foreign government. 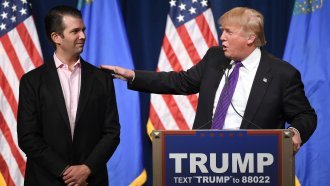 That's a pretty condensed summary, but as you may or may not recall, we also learned Trump Jr. discussed that meeting with his father. And that's now a matter of interest to special counsel Robert Mueller and Congress. But when he was pressed for details about it Wednesday, Democratic Rep. Adam Schiff says Trump Jr. declined to answer and cited attorney-client privilege.

"In my view, there is no attorney-client privilege that protects a discussion between father and son," Schiff said. "The claim of privilege is that at a time when father and son were discussing the June 9 meeting and emails that led up to it, they had discussion in presence of counsel."

That's the perspective of a high-ranking Democrat on that committee. The Republican lawmaker leading that particular investigation — Rep. Mike Conaway — told reporters he felt Trump Jr. adequately answered lawmakers' questions. We don't have the full context, because the grilling wasn't public. In any case, the point of the testimony is for Congress to get closer to an answer about whether the campaign colluded with the Russian government. For now, it doesn't appear lawmakers got much closer to one with this latest committee hearing.