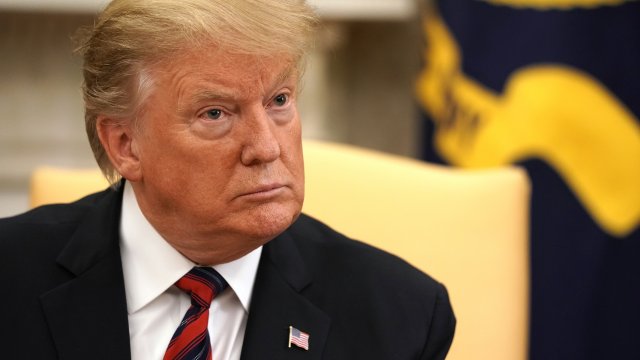 President Donald Trump is asserting executive privilege over all documents subpoenaed by Congress — including the full, unredacted Mueller report.

The Justice Department informed House Judiciary Committee Chairman Rep. Jerry Nadler of the move just before his panel's hearing on the issue Wednesday.

Let's back up. Attorney General William Barr released a redacted version of special counsel Robert Mueller's Russia investigation report last month. The House panel subpoenaed the full version, along with other evidence, which Barr refused to turn over.

So the committee decided to move forward with a vote to hold Barr in contempt of Congress for not releasing the materials.

That's when Barr wrote this letter to the president, asking him to invoke executive privilege.

Executive privilege argues that presidents and other top executive branch officials may refuse subpoenas and other demands for information in order to keep certain documents private. It's generally used under the theory that releasing such material would disrupt the daily functions of the White House.

House Democrats say they need the entire report and materials in order to make a determination about whether the president obstructed justice.

"As a co-equal branch of government, we must have access to the materials that we need to fulfill our constitutional responsibilities in a manner consistent of past precedent. This is information we are legally entitled to receive and we are constitutionally obligated to review," said Rep. Nadler.