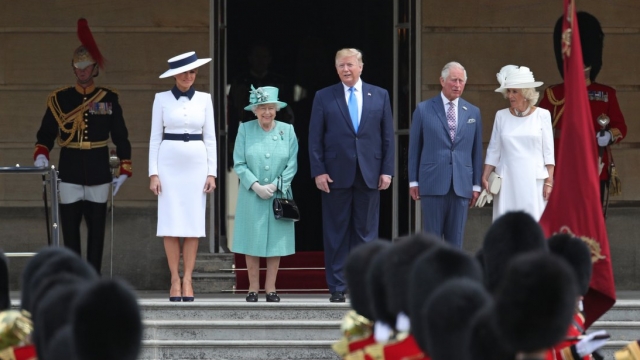 He met with Queen Elizabeth II, the Prince of Wales and Duchess of Cornwall during an official welcome ceremony at Buckingham Palace. In their visit at the palace, the world leaders viewed curated pieces from the Royal Collection depicting the long standing relationship between the U.S. and the U.K. The Queen also gifted President Trump the first-edition of Winston Churchill's book on WWII.

The President and first lady then visited Westminster Abbey to pay their respects at the Grave of the Unknown Warrior.

President Trump's visit has been met with protests. Shortly before landing In London, the president tweeted that London Mayor Sadiq Khan "has done a terrible job as mayor," and called him a "stone cold loser." His comments came after Khan called the President "one of the most egregious examples of a growing global threat," criticizing "rolling out the red carpet" for his state visit.

The President is scheduled to meet with British Prime Minister Theresa May Tuesday. Last month, May announced she'll step down from her position on June 6. And on Wednesday the commander-in-chief will attend a ceremony to mark the 75th anniversary of D-Day.