A Divisive Impeachment Attempt Could Backfire on Democrats 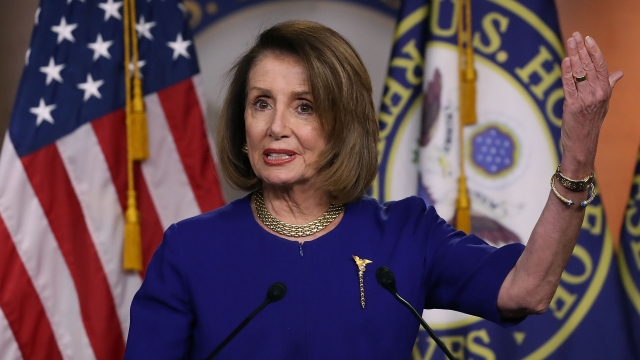 House Speaker Nancy Pelosi is against impeachment for President Donald Trump, because it would be divisive. Recent polling and history backs her up.

Two thirds of Democrats say Congress should begin the process to impeach President Donald Trump, but the top Democrat in Congress says doing so would divide the country, likely hurting the party in 2020.

In an interview with Washington Post Magazine, House Speaker Nancy Pelosi said, “Impeachment is so divisive to the country that unless there's something so compelling and overwhelming and bipartisan, I don't think we should go down that path, because it divides the country. And he's just not worth it."

And recent numbers back her up. A Quinnipiac poll found that although most Democrats support impeachment, 59 percent of Americans overall are against it.

Sixty percent of those who identify as independent said they were against impeachment.

Without bipartisan support, any impeachment effort against President Trump is likely to fail — and could even end up hurting Democrats in the looming 2020 elections.

It’s happened before. During the 1998 midterms, House Republicans focused much of their campaign messaging around impeachment proceedings against then-President Bill Clinton over his affair with White House intern Monica Lewinsky.

It backfired. Democrats gained five seats in the House, marking the second time since the Civil War that the president’s party gained seats in a midterm election.

Exit polls showed that 6 in 10 voters did not think the President should be impeached and disapproved of the way Republicans in Congress had handled the matter.

Even Independent Counsel Kenneth Starr, whose report on Clinton became the basis for the House impeachment vote, said in a recent interview that "The better call would have been a resolution of censure."

Still, some House Democrats are pushing for Trump's removal. Michigan Rep. Rashida Tlaib along with California Rep. Brad Sherman, are planning to introduce articles of impeachment. But even they admit that their case isn't a winning one right now.

"It's important that impeachment be on the table, it is legally justified, but it's not politically possibly to actually remove the president until we change the thinking of the American people," Sherman said in a CNN interview.

Even if Democrats did pass articles of impeachment in the House, Trump would only need to hold 34 out of 53 GOP Senators to avoid a conviction.

In an interview with Politico, Jerrold Nadler, the head of the House Judiciary Committee, which would oversee such proceedings, said, "You don't want to divide the country, so you have to think you have such a case that once the case is finished being presented, enough people understand you had to do it."

Many say that evidence could come in Special Counsel Robert Mueller's imminent report on possible ties between the Trump campaign and Russia.