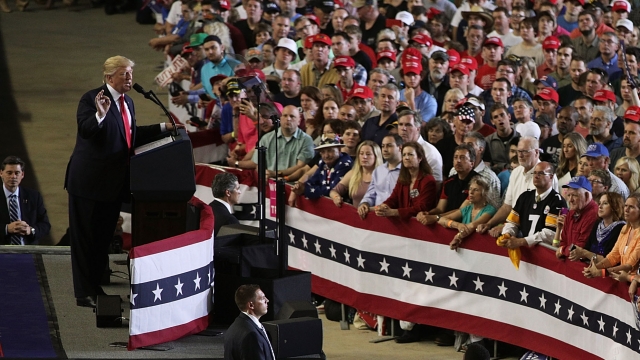 Donald Trump spent his 100th night as president of the United States doing what he says he loves most.

He hosted a rally in Harrisburg, Pennsylvania, instead of attending the annual White House Correspondents' Association Dinner in Washington, D.C.

"And I could not possibly be more thrilled than to be more than 100 miles away from Washington Swamp, spending my evening with all of you, and with a much, much larger crowd and much better people," Trump said.

"For the last 100 days, my administration has been delivering every single day for the great citizens of our country. Whether it's putting our coal miners back to work, protecting America's steel and aluminum workers ... or eliminating job-killing regulations, we are keeping one promise after another," he said.

Trump has checked off several promises outlined in his "Contract With the American Voter" dealing with trade, regulations and lobbying. But he's fallen short on promises that require the help of Congress, such as replacing Obamacare and securing funds for a border wall.

Looking forward, Trump said the next items on his agenda are deciding on the Paris climate agreement and renegotiating the North American Free Trade Agreement.

He also explained why he no longer labels China a currency manipulator — in part because "they stopped," but mainly, he said, he wanted China to be an ally in negotiations with North Korea.

Toward the end of his speech, he promised to keep going after so-called sanctuary cities, protecting law enforcement, and fighting to repeal and replace Obamacare.

But in regards to immigration, terrorism and border security, Trump did something he's done before: He read lyrics to "The Snake." He dedicated this reading to Department of Homeland Security John Kelly and his agents in Immigration and Customs Enforcement.

The lyrics tell the story of a woman who rescues an injured snake and gets bitten by the snake in the end.

"'Oh, shut up! Silly woman,' said the reptile with a grin. 'You knew damn well I was a snake before you took me in,'" Trump said reading the lyrics written by Al Wilson.