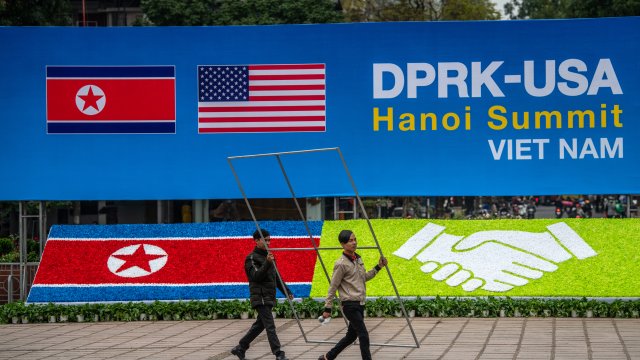 Ahead of his second summit with North Korean leader Kim Jong-un, President Trump says he's in no rush to speed up denuclearization on the peninsula.

President Trump has said: "I'm not in a rush, I don't want to rush anybody. I just don't want testing. As long as there's no testing, we're happy."

The president is meeting Kim in Hanoi, Vietnam, eight months after the pair first met in Singapore. The Hanoi summit is expected to build on the vague joint commitment to denuclearization the leaders previously signed.

Although North Korea hasn't done any actual disarming since talks with the current administration began, they have stopped publicly testing missiles and nuclear weapons  — something the president has seized on as proof that diplomacy is working.

But it's unclear how much progress the two countries have actually made: a senior White House official says there's still no common definition for what denuclearization actually means. Clarifying the terms of the Singapore summit might end up being an important part of this meeting.

U.S. officials have pushed for the closure of North Korea's Yongbyon nuclear enrichment plant as a concrete first step towards denuclearization. Closing the aging plant would dent the country's ability to produce new nuclear material, without impacting its current stockpiles of nuclear weapons.

But in order to get that concession, the U.S. will probably have to ease the economic sanctions that are pressuring North Korea. Secretary of State Mike Pompeo has been reluctant to say the U.S. is willing to do that until North Korea surrenders its nuclear weapons.

Pompeo told CNN, "We've made it very plain to Chairman Kim, the alternative to giving up his nuclear weapons is remaining a pariah state, a nation that is unable to trade, unable to grow, unable to take care of its own people."