It's Hard To Know What To Expect From Trump-Putin Summit 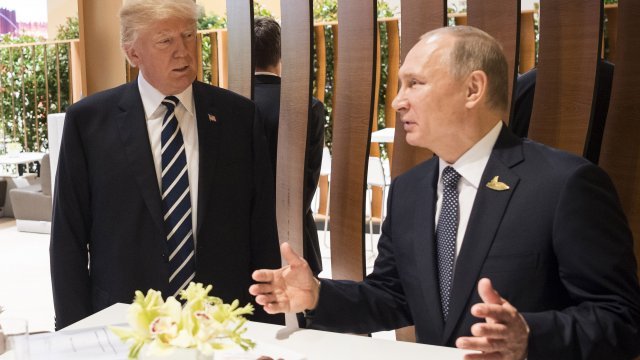 SMS
It's Hard To Know What To Expect From Trump-Putin Summit
By Gabrielle Ware
By Gabrielle Ware
July 15, 2018
Topics could include an arms treaty and Russia's annexation of Crimea, among others.
SHOW TRANSCRIPT

The summit between President Donald Trump and Russian President Vladimir Putin takes place Monday in Helsinki — and it's not really clear what to expect.

That's because President Trump hasn't publicly revealed a formal agenda for the meeting.

It comes on the heels of a Department of Justice indictment charging 12 Russian intelligence officers with meddling in the U.S. presidential election — though the meeting was scheduled before that announcement.

Trump says he'll bring up the indictments with Putin but he doesn't expect a confession. Other topics could include creating an arms treaty with Russia, the civil war in Syria and Russia's annexation of Crimea.

Some analysts have said there's also a real risk to the upcoming summit. They say Russia potentially has a lot to gain, but the U.S. risks making concessions and getting nothing in return.