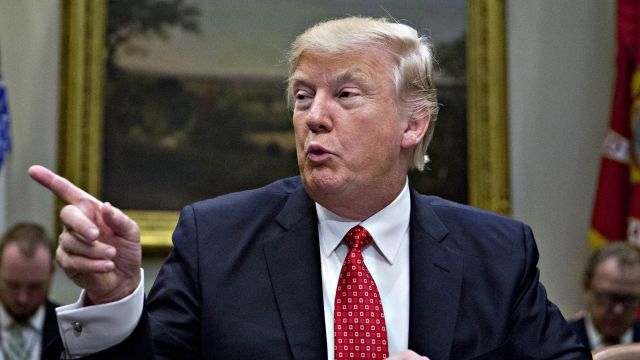 SMS
Trump Still Hasn't Acted On One Of His Most Popular Campaign Promises
By Eugene Daniels
By Eugene Daniels
February 13, 2017
President Trump made a lot of promises on fixing infrastructure, but there's been no movement since he became president.
SHOW TRANSCRIPT

But there seems to be one biggie he hasn't taken action on.

Sure, it's still less than a month into his presidency. But with the velocity at which the new administration has been signing executive orders or sending signals on its priorities, it's a bit surprising infrastructure hasn't really been touched on — especially since spending money on bridges and roads is popular.

Infrastructure plans can provide a whole lot of jobs — especially blue-collar jobs the president has promised to make a linchpin of his presidency.

But a Trump-sized infrastructure plan that increases federal spending might cause some serious GOP in-fighting, so that could be part of the holdup. It's not a conservative idea at all.

Even though the majority of Republican lawmakers have jumped on the Trump train since last year, billions and billions of dollars of federal spending could be the thing that starts a huge fight in the GOP.