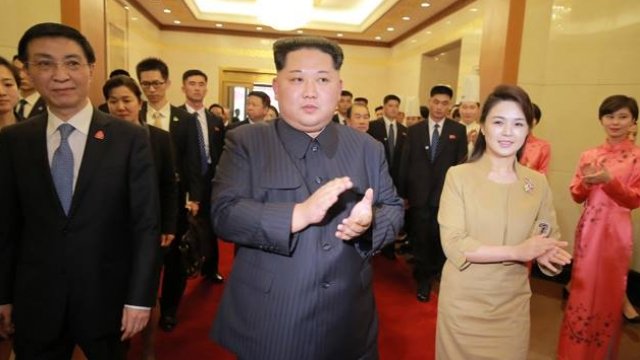 SMS
President Trump Has Yet To Speak With North Korean Leader Kim Jong-Un
By Jake Jones
By Jake Jones
April 17, 2018
The White House said conversations are being held "at the highest levels," but the two heads of state have yet to talk directly.
SHOW TRANSCRIPT

President Donald Trump and North Korean leader Kim Jong-un have yet to hold direct talks. But the White House said conversations are being held "at the highest levels."

While the president was visiting with Japanese Prime Minister Shinzo Abe at his Mar-a-Lago resort in Florida, a reporter asked Trump if he's spoken to Kim directly. Trump said yes.

But the White House quickly clarified Trump and Kim hadn't yet spoken. According to a pool email sent to reporters, it wasn't clear if Trump was responding to the question about Kim specifically or another question being shouted at him.

The Washington Post reported Tuesday evening Trump's nominee for secretary of state, Mike Pompeo, made a secret trip to North Korea around Easter. Two people who spoke with the Post said he did meet with Kim.

Trump and Kim are still set to meet within the next few months. If they do talk, it would be the first time a sitting president has ever personally met with a North Korean leader.