Presidents Have Wide Discretion When It Comes To Medals Of Freedom 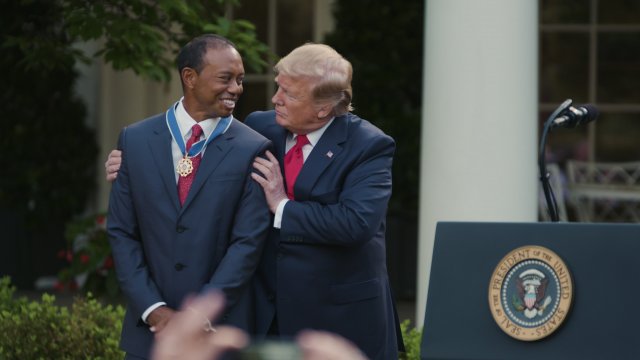 At 43 years old, Tiger Woods was an unlikely pick for the nation's highest civilian honor.

"Tiger, congratulations on receiving the Presidential Medal of Freedom."

It may seem a bit odd to give what is essentially a lifetime achievement award to someone just 43-years-old.

But we have seen through these Medal of Freedom ceremonies that President Donald Trump likes winners — especially those who win in sports.

Out of the eight medals he has doled out so far, four have gone to athletes. That is significantly more than previous presidents have given to sports stars.

A study of the first 50 years of the medal found about 4 percent of recipients were athletes. But overall, President Trump hasn't really been keen for these types of events

A USA Today analysis found the president is pacing well behind recent presidents when it comes to bestowing the medal.

Perhaps it should be no surprise then that the golf-enthusiast president chose to give the increasingly rare honor to his friend and business partner.

The two have been involved in golf related business deals in the past, and ethics watchdogs criticized Trump for using this achievement to boost his brand.

But, every president has used the medal to in some ways promote people and priorities that are important to them. President Obama even delivered one to his own vice president.

And the Commander in Chief doesn't need approval from Congress or anyone else to decide who gets a Medal of Freedom, meaning they have broad discretion over who they can give them to.