Trump Tweets Harley-Davidson 'Will Be Taxed Like Never Before' 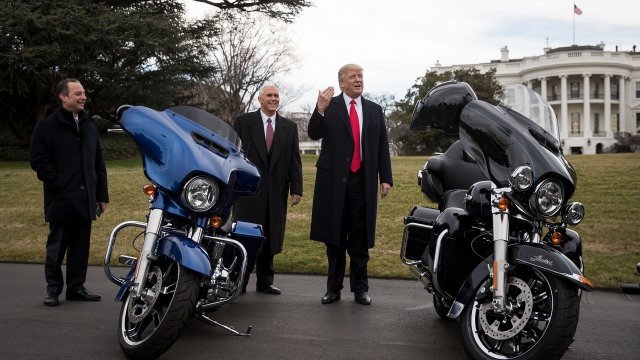 SMS
Trump Tweets Harley-Davidson 'Will Be Taxed Like Never Before'
By Gabrielle Ware
By Gabrielle Ware
June 26, 2018
President Donald Trump attacked the motorcycle company on Twitter after it announced a plan to move some production overseas.
SHOW TRANSCRIPT

President Donald Trump set his sights on Harley-Davidson in a round of Twitter attacks on Tuesday, saying the iconic motorcycle company "will be taxed like never before!"

It follows a proposed plan by Harley-Davidson to move some of its production overseas. The EU raised an existing tariff it had on the company's motorcycles by almost five times in retaliation for the U.S.' tariffs on EU aluminum and steel.

Harley-Davidson says it would lose about $2,200 for each bike it exported, and a total of up to $100 million a year, due to the hike.

But Trump says the tariffs are just an excuse and that the company had existing plans to move.

Either way, moving some production overseas looks like it may be in Harley-Davidson's best interest. Its last quarter sales fell by 12 percent in the U.S. but grew by about 7 percent in multiple continents, including Europe.

The rift is particularly notable because Harley-Davidson has traditionally, had strong support within the GOP. Trump himself once said, "Harley-Davidson is a true American icon, one of the greats."