Trump Had A Not-So-Great Radio Interview On Foreign Policy 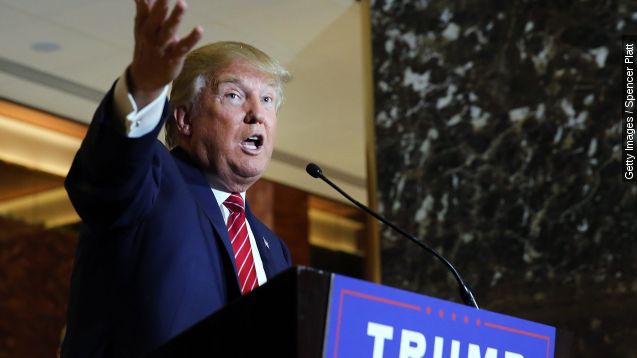 SMS
Trump Had A Not-So-Great Radio Interview On Foreign Policy
By Jake Godin
By Jake Godin
September 4, 2015
Donald Trump took a hit in an interview with conservative radio host Hugh Hewitt when asked a foreign policy question he didn't quite understand.
SHOW TRANSCRIPT

The Donald, on foreign policy: (Video via Donald Trump)

Hugh Hewitt asked "Are you familiar with General Soleimani?"

Donald Trump replied "Yes, but go ahead, give me a little, go ahead, tell me.

Trump said, "Yes, OK, right. The Kurds, by the way, have been horribly mistreated by us —"

And Hewitt interrupted him with, "No, not the Kurds, the Quds Forces, the Iranian Revolutionary Guards Quds Forces."

These are the Kurds. They're an ethnic group in the Middle East and have been key in fighting against ISIS in northern Syria and Iraq.

"By the way, when you say Quds versus Kurds — I thought he said Kurds, this third-rate radio announcer, when I did the show ..." Trump said while on MSNBC's "Morning Joe."

He claims Hewitt hit him with a "gotcha" question. Hewitt disagreed. As did CNN.

"OK, so is that a gotcha question, John Avlon?" a CNN anchor asked.

"It's not a gotcha question, but I also don't think this is a massively unbearing gaffe on the Trump scale," Avlon replied.

Hewitt asked Carly Fiorina the same question. She handled it a little better. (Video via Socrates In The City)

Hugh Hewitt said "Whether or not he and the Quds Force's behavior will be impacted by the Iranian deal."

Carly Fiorina replied, "OK ... of course. ... Look, we know that the general of the Quds Force has been a powerful tool of the Iranian regime to sow conflict."

Trump may know buildings, but he may need to brush up on his foreign policy in the future. (Video via Donald Trump)