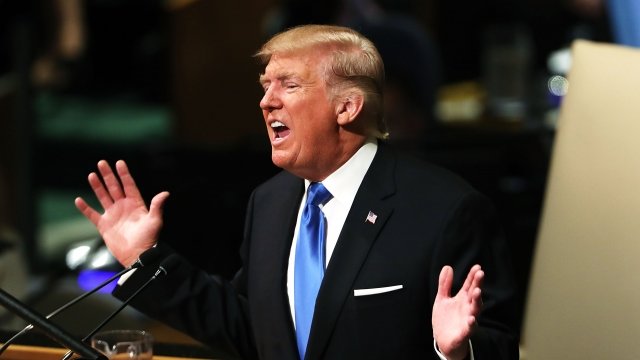 SMS
Trump Questions NBC's TV License Over A News Story
By Matt Picht
By Matt Picht
October 11, 2017
Trump is pushing back against NBC News' report that he called for a nearly tenfold increase in the U.S. nuclear arsenal.
SHOW TRANSCRIPT

Trump told reporters: "It's frankly disgusting the press is able to write whatever they want to write. And people should look into it."

Trump can't exactly pull NBC News off the air in response. Television licenses are generally given to local stations, not national networks, so the White House would have to challenge a bunch of NBC affiliates to black out the network.

And stripping a station of its license is pretty tough. One expert told Vice, "You basically have to kill someone or be a child sex predator to lose your broadcast license."

But Trump's words still have weight, even with no action attached. After his tweet, several press freedom groups put out their own statement saying "the president should be working to uphold the values of the First Amendment, not tearing them down."

Editor's note: We've changed the language in this story to clarify that President Trump did not directly threaten to revoke NBC News' license.