We May Soon Find Out If Trump Can Remove Monuments' Protections 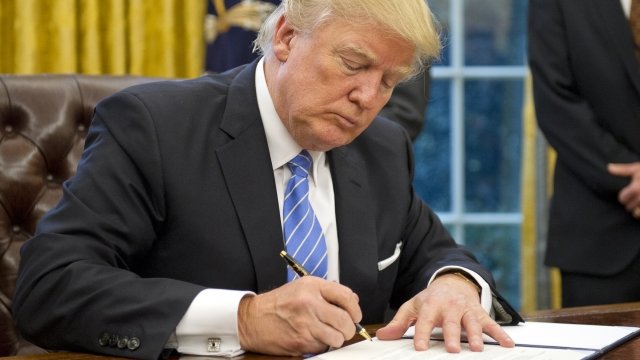 SMS
We May Soon Find Out If Trump Can Remove Monuments' Protections
By Ryan Biek
By Ryan Biek
August 24, 2017
Activists worry the president will remove the protected status of some national monuments that recent presidents put in place.
SHOW TRANSCRIPT

Can President Donald Trump completely take away a national monument's protection? We may find out.

On Thursday, Zinke gave Trump his recommendations as to which monuments he thinks should be scaled down in size.

Though he didn't immediately release them to the public, he did tell The Associated Press he wouldn't recommend completely scrapping any monument. Instead, he said he'd push to reduce the size of a "handful" of monuments.

In a summary of his report, Zinke said the boundaries on some monuments are "arbitrary" or "politically motivated."

But conservationists worry Trump will take those recommendations a step further and remove some monuments' designations.

That move would be unprecedented. And whether he really could is up for debate.

Some, like Democratic Sen. Tom Udall, have already argued the Antiquities Act doesn't give Trump a legal right to remove a designation — mainly because it doesn't explicitly say he can.

But other legal experts argue a basic guarantee of the Constitution is that the government can reverse any action it was allowed to take in the first place.

Two legal experts told Politifact the Constitution doesn't explicitly say Congress can undo a law either, but Congress has long shown it's able to do just that by simply creating a new law.

Activists have threatened legal action if the Trump administration decides to alter or eliminate any national monuments.