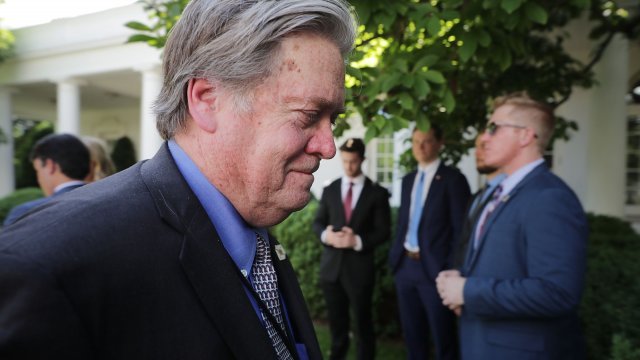 President Donald Trump says his former chief strategist Steve Bannon has "lost his mind." That's after Bannon made harsh comments about the president and Donald Trump Jr. in a soon-to-be-released book about the Trump presidency.

In a statement, President Trump accused Bannon of leaking information to the media while working at the White House and blamed the former adviser for Republicans losing the recent U.S. Senate race in Alabama.

Trump said: "Steve is learning that winning isn't as easy as I make it look. ... Yet Steve had everything to do with the loss of a Senate seat in Alabama held for more than thirty years by Republicans. Steve doesn't represent my base — he's only in it for himself."

Speaking about possible collusion between the Trump campaign and Russian, Bannon said, "They're going to crack Don Junior like an egg on national TV."

"I know the book has a lot of things, so far of what we've seen, that are completely untrue," Sanders said. "We have many people that have quotes who are sourced to them that are now coming out publicly and saying that those things are not true."

Bannon was chief executive of Trump's presidential campaign for three months and was White House chief strategist for seven months before he left in August 2017.