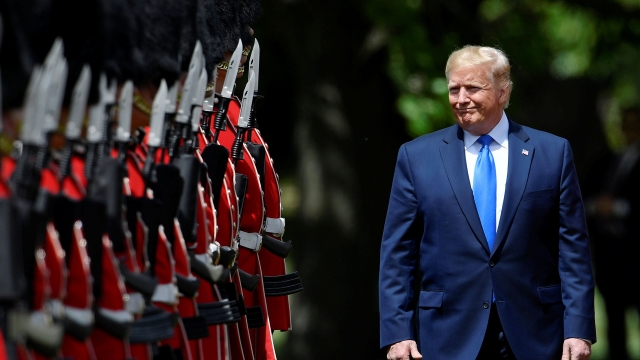 President Trump kicked off his visit to the U.K. by weighing in on the country's race for a new Prime Minister.

During an interview with The Sun, the president lavished praise on former Foreign Secretary Boris Johnson — one of several candidates running to replace U.K. Prime Minister Theresa May. The president stopped short of making an actual endorsement. But his praise for Johnson isn't particularly surprising, given that Johnson shares many of Trump's views on issues like Brexit.

Johnson has cultivated a hard-line stance on Brexit, going so far as to flirt with the prospect of leaving the European Union without a deal. If that happens, the U.K. will need to rely on a strong relationship with the U.S. for trade and security matters — which could give President Trump more influence in the country.

President Trump has never shied away from intervening in U.K. politics — especially on Brexit. During his last visit to the country, he undermined U.K. Prime Minister Theresa May's Brexit strategy by suggesting it would "likely kill" a potential U.K.-U.S. trade deal.

This time around, President Trump told U.K. media outlets argued the U.K. needed more leverage in its negotiations to exit the European Union. He also said the country shouldn't pay its nearly $50 billion bill to settle the U.K.'s financial obligations to the E.U. after Brexit.