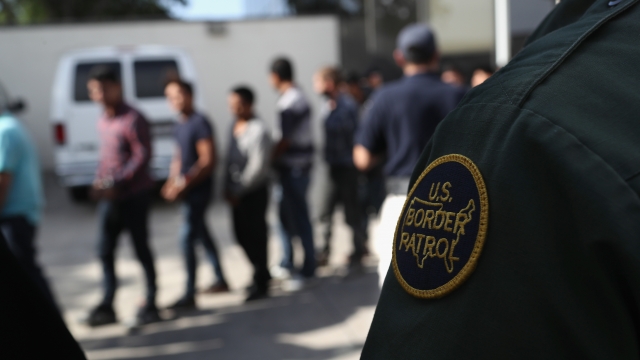 President Donald Trump is on a mission to build a border wall and change the country's immigration system. And he mentioned some of his complaints during his speech at CPAC.

"We say, 'Come back for a hearing in front of a judge.' You know how many judges you need to do this? We have 900,000 people backlogged. That's the good news. The bad news? Nobody shows up. Three percent of the people come back for a trial. It's insane," Trump said.

There are two checkable facts in that statement: the number of backlogged immigration cases and the percentage of immigrants who show up to their hearings. On one point the president is right, and on the other he's wildly inaccurate. Let's take a look at the official numbers.

The backlog in immigration courts has been a growing problem over the last 10 years. The Trump administration added more attorneys and judges into the immigration court system last year to try to chip away at that backlog. But data from the Department of Justice's immigration office says there were over 820,000 pending immigration cases at the start of 2019. So President Trump's statement, "We have 900,000 people backlogged," is pretty darn close.

But his comment about the attendance rate at immigration hearings doesn't get that same stamp of approval. "Three percent of the people come back for a trial." DOJ data on "in absentia" hearings is the best way to try to check that number. Those represent cases where an immigration judge ordered someone's removal when that person wasn't present in court. Over the past five years, the percentage of immigrants who weren't present when a judge handed down their removal order ranged from 20-29 percent. That means about 70-80 percent were in court. It's fair to say that people skipping their immigration hearings is a concern, but the percentage of people who do show up is way higher than the 3 percent the president asserted.