Trump's Donating Part Of His Salary To A Government Department 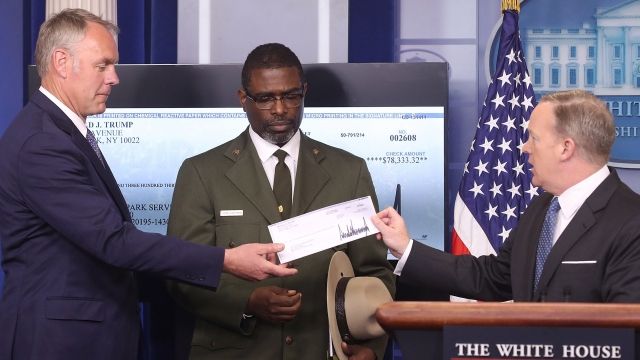 The money will go toward backlogged maintenance projects.

President Donald Trump has said he'll donate his presidential salary. Well, apparently he's been weighing his options, and the winner is:

"He has chosen this quarter to donate it to the National Park Service," White House press secretary Sean Spicer said Monday.

Secretary of the Interior Ryan Zinke said the money will go toward maintenance projects in the nation's historic battlefields.

But Zinke noted that the outstanding maintenance needed in those battlefields would cost about $229 million.

Ryan Zinke rode up to his first day on the job on a horse, of course.

On top of that, Trump's proposed budget would cut interior funding by around $1.6 billion.

Originally, Spicer said Trump would donate the money at the end of the year to a charity of the press corps' choosing. Spicer didn't say why that plan has changed.