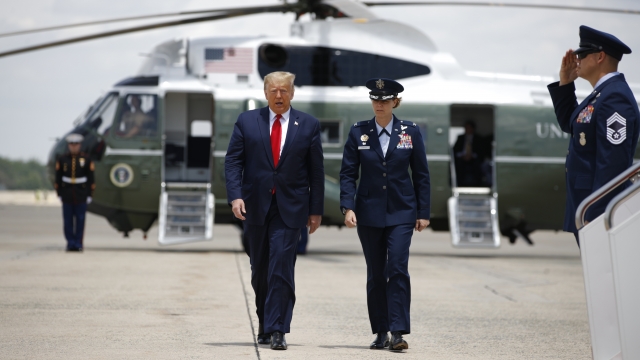 President Trump says he "will not even consider" renaming bases named for Confederate leaders, despite defense officials being open to discussions.

On Wednesday, President Donald Trump tweeted his administration will "not even consider" renaming military bases named after Confederate leaders.

Earlier this week, Army Secretary Ryan McCarthy and Defense Secretary Mark Esper signaled they're open to having a "bipartisan discussion" about renaming military bases. There are 10 Army installations named for Confederates, including Fort Bragg in North Carolina and Fort Benning in Georgia.

In light of the George Floyd protests, cities across the country have taken steps to remove Confederate monuments. The U.S. Navy has also banned the display of Confederate symbols.

But in a series of tweets, the president said: "The United States of America trained and deployed our HEROES on these Hallowed Grounds, and won two World Wars. Therefore, my Administration will not even consider the renaming of these Magnificent and Fabled Military Installations. Our history as the Greatest Nation in the World will not be tampered with. Respect our Military!"

During a briefing Wednesday, White House press secretary Kayleigh McEnany said the president "will not be signing legislation that renames America's forts."

"We've got to honor what has happened there, not rename it. So that is an absolute nonstarter for the president."